Why do Karate and Yoga Work? 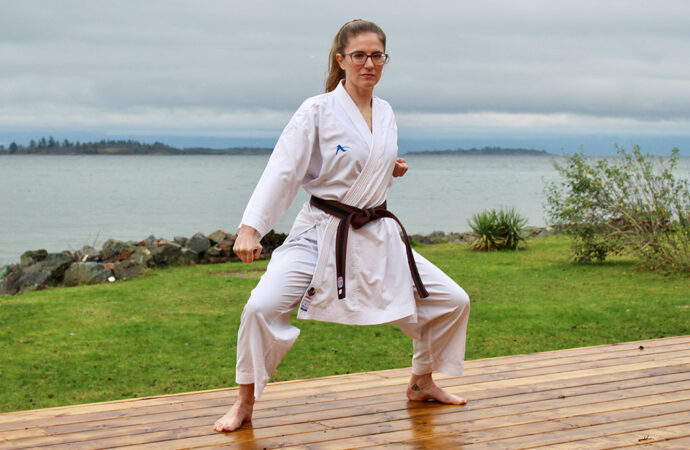 Have you ever meditated while performing a karate parade? A parade can represent an awareness of inner afflictions.

We all know how karate and yoga makes us feel. At the end of class we always feel better, more peaceful, more connected to ourselves.
But how does this happen? Why do yoga and karate work in this way? There are many answers to this question, from different perspectives. One answer that we will address in this article is found in the yoga sūtras of Patañjali, a set of 196 sūtras, each explaining one part of the path to enlightenment through yoga. These sūtras were written over 2000 years ago by a sage named Patañjali (Iyengar, 2002, jacket).
Patañjali explains yoga, humans, and the universe in 196 sūtras, in a logical and connected format written in the language of Sanskrit. These 196 sūtras can be likened to an instruction manual for life.
Like any good instruction manual, the first instruction welcomes you to the study of yoga, much like a car manual would congratulate you for your purchase of your vehicle.
The second instruction Patañjali gave in the list of 196 instructions is the definition of yoga. According to Patañjali, the definition of yoga is “Yogah cittavrtti nirodhah”, which translates to “Yoga is the cessation of movements in the consciousness”. (Iyengar, 2002, page 50)

Awareness is the block that deflects the strike of the affliction.

This leads us to the natural question of what causes the movements of consciousness? The causes can be intellectual, environmental and emotional or mental. (Iyengar, 2002, table 16). We will focus on the emotional and mental causes.
In Patañjali’s instruction manual for life, we find part of the answer in sūtra II.3, which for our purposes is instruction #54. According to Patañjali, one of the causes of the movements of consciousness is the “klesah” which translates to “afflictions”.

Patañjali taught that these five afflictions “ disturb the equilibrium of consciousness” (Iyengar, 2002, page 111). These afflictions cause movements in the consciousness, or in more modern terms, they disturb our inner peace.

JODAN UKE (upper block) meditating upon ASIMTĀ (ego/ pride).
Asmitā is that part of our ego that causes us pain when it becomes prideful or arrogant. There are many examples in human life of our ego causing us pain. But I will focus on just one, comparison.
Asmitā is the part of the ego that cries out the comparisons to other individuals. “I am better than he is because I am …….. “ You can fill this blank in for yourself. Or the opposite, “I am less worthy than her because she …….” Again you can fill in the blank.
Asmitā is the part of our ego that is based in a misconception of who we are. We are NOT the sum total of our perceived accomplishments and failures. We have a deeper self, that some call the soul. When we forget this, our equilibrium of consciousness (peace of mind) becomes disturbed.
In karate we can contemplate asmitā, by doing our upper (Jodan) blocks moving in an appropriate karate stance. The upper block represents our awareness of asmitā and in this awareness we can avoid the strike of the ego, or at least lessen the impact.
Exercise Format: 7 rounds of 10 blocks each round. Start round 1 with slow movement and increase the speed each round until in the 7th round of blocks you are at your top speed. The incremental increase in speed represents that as our awareness of asmitā improves, our reaction time to avoiding asmitā’s strike will improve.

When we worry we cause pain by trying to avoid pain.

CHUDAN UKE (moddle block) meditating upon RĀGA (Attachment to pleasure).
Rāga is the attachment to pleasure. This one is tough to teach and to practice in daily life because it goes against what we are taught in western society. Rāga is found when we enjoy something, and the enjoyment creates the desire for more. The desire for more creates an attachment to a particular future pleasurable outcome. And if we don’t get that pleasurable outcome, we are unhappy. For an example of rāga one only need look at consumerism over the past 50 years, which is founded on the encouragement of desiring more, achieving more, in order to feel good.
In contemplation of rāga do your middle (chudan) blocks. The middle block represents your awareness of rāga and in this awareness you can avoid the strike of rāga, or at least lessen the impact.
Exercise Format: the same format as with the upper block, moving in an appropriate stance.

GEDAN UKE (lower block) meditating upon DVESA (aversion to pain).
Dvesa is aversion to pain. This one is also tough to teach and practice in daily life because it too goes against everything we are taught in western society. We don’t like pain, of course. And that is normal. It is when we go out of balance and seek to avoid pain that we get out of balance. In the mere seeking to avoid it, we create ourselves PAIN. Our minds go a little crazy thinking forward at all the ways we will avoid ever be in a painful situation. WE WORRY. We will even create scenarios in our minds that we can then guard against, also known as worst-case scenario thinking. A huge percentage of our worries don’t even come true! What is true is that when we worry we cause pain by trying to avoid pain, and we then disturb our equilibrium of consciousness, our inner peace.
In contemplation of Dvesa do your lower (Gedan) blocks. The lower block represents your awareness of DVESA and in this awareness you can avoid the strike of DVESA or at least lessen the impact.
Exercise format: use the same format as with the upper block.

YOKO UKE (double block) meditating upon ABHINIVESAH (fear of death)
This one is easy to teach. Abhinivesah… fear of death is self-explanatory! Yet it is also the subtlest of all the afflictions. It is instinctive. It operates at levels we are not even aware of and drives our behavior in ways that may disturb our equilibrium of consciousness, our inner peace. As it operates at such deep levels in your being, you may not even be aware of it.
So how do we work with something we are unaware of? Life and death are “two sides of the same coin” (Iyengar, 2002, p. 117), they come hand in hand the second we are born. Through the practice of karate and yoga, through unifying body, mind and spirit, we can come to recognize and accept this coin of life and death, and then perhaps the moments where the fear of death is driving us will become clearer.
In contemplation of Abhinivesah, do your double (yoko) blocks. The double block represents your awareness of abhinivesah, and in this awareness you can avoid the strike of fear of death, or at least lessen the impact.
Exercise format: use the same format as with the upper block.

COMBINATION of BLOCKS meditating upon AVIDYĀ.
Patañjali teaches that avidyā is the source of all the other 4 afflictions just like the block combination contains all the blocks. Avidyā means lack of true spiritual knowledge. It is a lack of knowing who we are deep down under the ego, the attachments, the aversions and the fear of death. It is a lack of understanding of our connection to true Self or soul. If we had true knowledge, then the afflictions would not disturb us. To have true spiritual knowledge is to be enlightened without an attachment to the enlightenment.
In contemplation of avidyā, do your combination of all your blocks sequentially (upper, middle, lower, double) moving in an appropriate stance. The combination represents your awareness of avidyā, and in this awareness you can avoid the strike of lack of true knowledge, or at least lessen the impact.
Exercise format: use the same format as with the upper block.

YAKU SOKU KUMITE (prearranged sparring) meditation upon KLESA (afflictions).
To evolve this work it is very helpful to work with a partner, which can be done over zoom. We can perform Yaku Soku Kumite as partners using it to understand that the first step to a block is your awareness of the strike. The first step to being less disturbed by the 5 afflictions of consciousness is to be aware of them. As such, the attacker’s strike will represent the afflictions, and the defender’s block will represent the awareness of the afflictions.

To have true spiritual knowledge is to be enlightened without an attachment to the enlightenment.

Avidyā asmitā rāga dvesa abhinivesah klesah (IYENGAR,2002, page 111)
Lack of spiritual knowledge, ego, attachment to pleasure, aversion to pain, and fear of death cause us to suffer. Becoming aware of these afflictions, these “klesah”, allows us to deflect them, or at a minimum, lessen their impact. This leads to decreased disturbance and movements in consciousness and ultimately gives us more inner peace.
Even if we are unaware of these klesah, yoga and karate will create inner peace. Through the practice of karate stances, yoga poses, karate breathing, and yoga breathing, we lessen some of the movements of consciousness by uniting our body, mind and spirit. We get below the afflictions even if we are unaware of them. We get below the afflictions to the true knowledge of who we are. In the uniting of body, mind and spirit, we connect with our deeper Self, our soul. It is in this unity of body, mind and spirit and the resulting connection to our deeper Self, that the movements of consciousness lessen and inner peace is found.

Bibliography
The yoga sūtras of Patañjali have been translated and interpreted by many gurus over the past 100 years. This article is based on:
Iyengar, B.K.S., Light on the Yoga Sūtras of Patañjali, Thorsons, 2002.